When we were asked to speak at the 2019 SOHN Heart and Minds Conference, we could not have been more pumped up. First and foremost TDM felt completely aligned to the mission of the conference – SOHN has done a phenomenal job in raising almost $20m for medical research in Australia. This was the clincher for us, having to initially overcome the mental hurdle of being judged on a one year performance horizon, when we make investment decisions based on likely outcomes over a decade, not months. As you may or may not know, each stock pick from the conference each year then becomes a portfolio company of the Hearts and Minds LIC (HM1:ASX) The pressure was on, but we knew within seconds, what our pick was going to be…

One of the most unknown, underappreciated, Australian innovation and commercial success stories, that since IPO in 2006 has achieved (and get ready to wipe your eyes in disbelief…);

Currently, this business has:

DO YOU WANT MORE?

What if we said it has the potential for EBITDA to grow over 20% p.a over the next 5 years

Fairy tales don’t come any better than this* – having owned the business for over 13 years, this was the chance we had always wanted to explain this incredible business to the world.

*Yes, they actually do – fairy tales that may, in fact, trump this include Cathy Freeman winning the 400m at the Sydney Olympics in front a fanatic home crowd, Steve Waugh’s heroic hundred at the Oval on one leg and Leicester City winning the Premier League.

Turns out great minds do in fact think alike, and none other than the incredible Emma Fisher (nee Goodsell) from Airlie Funds Management was also going to pitch this stock. Having seen Emma in action at the 2018 SOHN Conference in Melbourne we knew she would do a phenomenal job (which she did). We did want to add one little tidbit though to her pitch as we think it is crucial in understanding what has and will continue to drive value for Mineral Resources as a business and ultimately their shareholders. We call it the Mineral Resources Flywheel (thanks Jim Collins for the mental model). As described by Jim, some of the best businesses in the world exhibit powerful and self-perpetuating flywheels – attributes or forces that build on each other, and in doing so create unstoppable momentum.

MRL is a world-leading mining infrastructure specialist, whose core competitive advantages revolve around engineering and commercial innovation. It is this level of sustained innovation that has allowed them over the last 13 years to consistently deliver best in class mining infrastructure sites 3 times faster and at 1/3 the cost of all other market players. 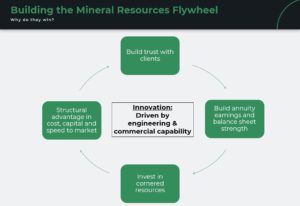 A quick history lesson…(and admittedly there are a number gaps here, but bear with me for simplicity and time)

Let’s turn the clock back all the way to 2006. James Blunt was on the airwaves, wooing us with his hit “You’re beautiful”, John Howard was PM and if someone said the letters GFC, you thought they were drunk and needed fried chicken. Importantly though, it was also the year the MRL flywheel was getting it’s first big push from Chris Ellison (who in our mind is one of Australia’s greatest entrepreneurs).

Mineral Resources delivered a 12m tonne iron ore crushing project at Nammuldi for Rio Tinto, their largest build, own, operate (“BOO”) project for a major miner, and they deliver it in true MRL fashion – at 1/3 the cost, in 1/3 the time and operate it with 1/3 the staff of what was originally estimated by non-MRL folk. Fair to say Rio was happy with the outcome, and must still be today 13 years later, as MRL still own and operate the plant. MRL proves they do in fact have a structural advantage in cost, capital and speed to market, and the trust battery with the major miners starts to get charged.

The next big nudge to the flywheel came in 2008 from Fortescue Metals’ Christmas Creek iron ore expansion – two plants totalling 60m tonnes that still remains one of the largest in the world. MRL is starting to build a reputation as the ‘little engine that could” – delivering world-class sites for world-class miners, which further builds trust with clients.

With the building cash flow generated from a growing list of mining infrastructure services contracts, Chris’ entrepreneurial spirit could start to be harnessed, and no better example exists than the deal with Mount Marion in 2009 – a mine southwest of Kalgoorlie which just so happened at the time to hold the world’s second-largest high-grade lithium reserves. With this investment in a “cornered resource” MRL would build, own and operate the mining infrastructure on a 30-year contract, as well as owning 30% of the mine itself. This, of course, changed recently to a 50/50 JV with Ganfeng, and an upgrade to the mine that is able to produce up to 400k tonnes of spodumene concentrate per year. The flywheel is spinning hard at this point. We estimate this mining infrastructure contract alone contributes $30m in annuity-style EBITDA p.a and MRL are moving across the mining infrastructure value chain.

And now the for the fun stuff – what to do with all these annuity earnings, having proved out the BOO model and the number of long term contracts mounting? You might need to reuse those tissues you used to wipe your eyes earlier…

Wodgina. That is what.

There is no way to give this any more colour than the cold hard facts;

Step 1: Buy the mine site for an immaterial sum (we estimate $50m), and invest c$600m over three years. Total investment c$650m

Step 2-4: Build a best in class mine, using proprietary and innovative techniques to deliver this at the lowest possible cost.  Extract $250m in cash flow while building operations from the site. Sign a 30-year mining services agreement we expect to produce $30m in EBITDA per annum

The Flywheel is spinning – so?

And so the flywheel continues to spin – innovation allows MRL to deliver incredible outcomes on-site, allowing them to do it more often, which has built up their annuity income streams, which allows them to invest in cornered resources and continually innovate. With a bulletproof balance sheet, the proceeds from Wodgina are expected to fund the port and rail projects that will undoubtedly deliver huge long term earnings growth for Mineral Resources, again moving them further across the mining infrastructure value chain, further fuelling the flywheel’s velocity.

And so, why such a mismatch between the market’s view and how we (and other long term shareholders like Emma @ Airlie) view the business? Rather than thinking (and valuing) MRL like you would a typical mining services business, with earnings heavily dependent on the mining cycle, why would you not start to think of it like a Macquarie Group – yes there are market-facing businesses whose earnings will rise and fall with commodity prices, but underpinning this, after 13 years of track record, are very strong annuity earnings streams. To back this up, in the last 5 years, MRL have retained 96% of all of its mining services contracts (and the other 4% is accounted for through a mine closure that had run its expected life span), and 76% of these contracts are for longer than 5 years (and a third is longer than 10 years!). Just to spell this out more clearly – MRL’s mining infrastructure earnings (crushing/processing/contract mining/accommodation) are high-quality annuity-style earnings with a high return on funds employed and the commodities (market facing) business can then be viewed as cream on the cake. Tasty cream. Very tasty cream.

We didn’t have the opportunity at SOHN (but loved Emma’s pitch!) to give the insight into our own thinking and appreciation of both MIN’s track record and unique business model. After all, at the moment, the mining infrastructure business and cash/investments alone are worth more than the share price.  We can only hope over time more people feel the same way as we do but don’t expect this to happen overnight. Thankfully we are very patient investors. If it takes another 13 years and 20x bags later, then so be it. Sometimes it is best just to let these compounding machines speak for themselves.