Since its launch, Spotify has driven transformational innovation in the music industry and built one of the strongest millennial brands globally. Its 2-sided marketplace strategy and freemium business model have created a far superior value proposition for both consumers and content creators and represent a powerful growth engine for the business.

Spotify direct listed on the NYSE in April 2018 and TDM invested in the business 12 months after this point in time.

Spotify is a passionate, mission-driven organisation led by a world class management team. It represents another case of TDM investing in an underappreciated and undervalued next-generation winner and backing and supporting a great management team to achieve significant long-term shareholder value.

TDM initially invested in April 2019 after Spotify’s direct listing in April 2018. At the time of our initial investment, we believed the market underappreciated the size of the growth opportunity and the current and future trajectory of Spotify’s competitive advantage.

At the 2018 SOHN Hearts and Minds Conference, Hamish Corlett pitched Spotify as TDM’s highest conviction idea, with the central thesis revolving around the power of podcasting and its ability to increase Spotify’s ARPU over time.

Spotify continues to grow its user base strongly and is executing well towards its vision of being the world’s leading audio platform. Since our initial investment, the share price has tripled, primarily off the back of strong management execution as well as a greater understanding and appreciation by the market of Spotify’s market power, innovation and multitude of growth levers at its disposal to pull in the coming decade. 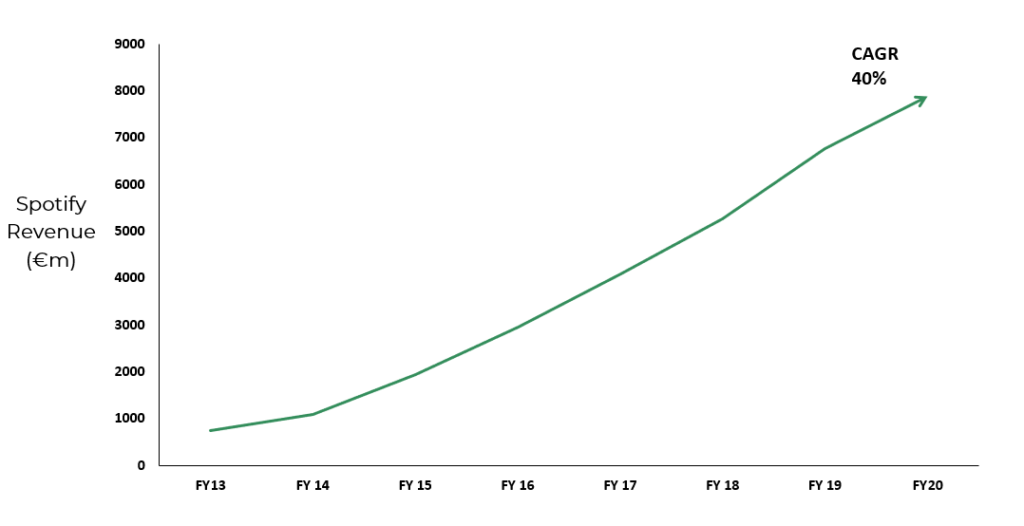 Previous
ellie mae.
Next
allbirds.
TDM is currently not open to new clients